Exam results days... and what next?

Although girls are underrepresented in those taking STEM A levels, they tend to outperform boys. Girls outperformed boys in physics (71.5% achieved A*-C grades compared with 69.6%), and design and technology (74.6% v. 64.1%), despite being heavily outnumbered by boys in these subjects. 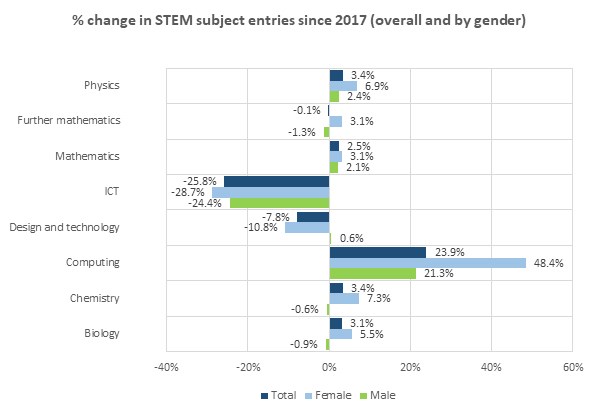 The number of entries to Highers (191,951), the main qualification for university entry in Scotland, was down by 1.5% compared with last year (194,813). Higher entries in STEM subjects in 2018 declined slightly as a percentage of the total from 2017, going from 30.6% to 30.1%. A-C pass rates improved for administration and IT, biology, chemistry, computing science (greatest improvement), health and food technology and mathematics and declined for design and manufacture, engineering science and physics.

Overall entries in STEM-related GCSE subjects rose 6% this year compared with 2017, but there were significant differences at subject level. Biology (+23%), chemistry (+18.6%) and physics (+17.2%) saw substantial increases in entries, whilst they fell considerably in design and technology, engineering and ICT.

Due to the changes related to the introduction of the science double award, only indicative comparisons can be made in science-related GCSEs with 2017. Nevertheless, there were 17.6% more students entering the new double award relative to the combined number of entries for science and additional science (including further) in 2017. These are most likely to be the students who previously took the three sciences using the entry pattern of science, additional science and further additional Science.

Despite the increase in the number of girls taking STEM subjects at GCSE level (1.11 million in 2018 compared with 1.05 million in 2017), female participation has not improved in terms of the share of subject entries accounted for by girls. Across STEM subjects, girls still made up 47.7% of all entries, a share similar to last year’s (48%). 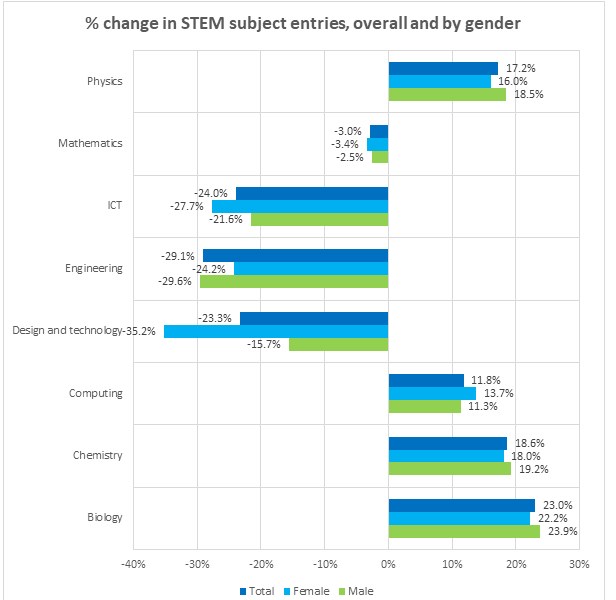 Tomorrow’s Engineers has some useful guides for whichever exam courses student’s have just received marks for – Nationals, Highers, Advanced Highers, GCSEs, or AS and A Levels. The guides look at different routes, including vocational qualifications, apprenticeships and university.

Engineering is a broad subject covering a huge number of fields and there are routes in for everyone.