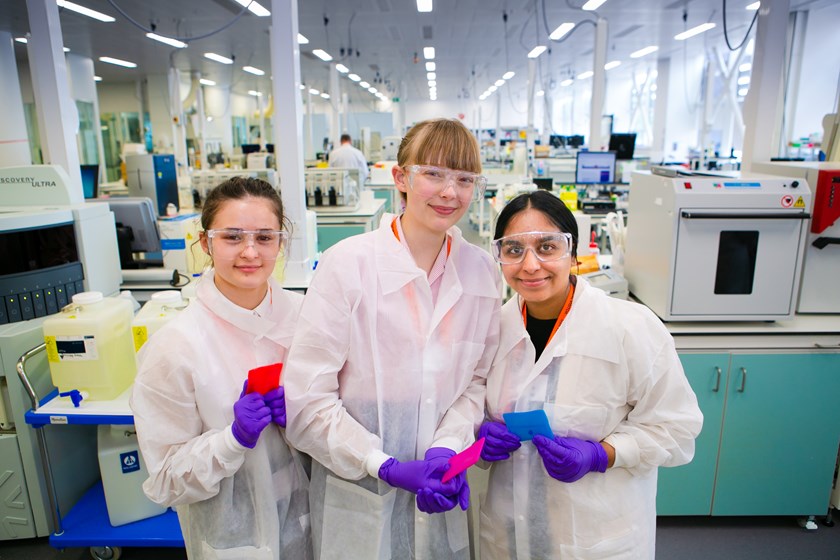 Three winners of the top prizes in The Big Bang Competition 2019 have just completed work experience at GSK’s headquarters in Ware, where they got a taste of what it’s like to work in a global healthcare company and received an Industrial Cadet Award.

GSK UK Young Scientist of the Year Maeve Stillman, aged 15 from the St Mary’s College in Derry/Londonderry, took part in the three-day placement alongside GSK UK Young Engineers of the Year Aalia Sellar and Grace Lord, both aged 14 from Loughborough High School.

This placement was part of their competition prize, sponsored by GSK, which they won when they competed in the finals of The Big Bang Competition at The Big Bang Fair in March 2019. Their full prize included £2,000 to improve their projects and continue their STEM journeys, the opportunity to complete work experience, and the chance to host a stage show in their school to teach their classmates all about germs, microorganisms and the spread of bacteria.

Of their 3-day opportunity to see the journey from molecule to market, Grace said: ‘We had the chance to go around the GSK labs to learn about different types of drugs and how they’re processed from the moment they’re created to when they’re being covered, when they’re packaged and then when they’re distributed off.’

‘We got to meet all these amazing people who work directly in an experiment from start to finish,’ Maeve added. Her winning science project investigated how activated charcoal supplements affect the absorption of common medicines like paracetamol, so she is passionate about the science behind healthcare.

‘I’m so grateful to GSK – they’re changing the world, and they’re basically giving loads of kids opportunities to use their imagination and use their projects to actually do stuff,’ Maeve concluded.

Aalia thanked GSK for believing in them despite their young age. ‘It’s just so amazing to have people standing behind us and supporting us to learn and develop.’

Brendan Miralles from Loughborough Grammar School, who is part of Aalia and Grace’s winning Music Splash app team, will take up his work experience place next year.

Since being crowned overall winners at The Fair, the 4 students have also competed in international competitions in the United States, China, and soon in Bulgaria.