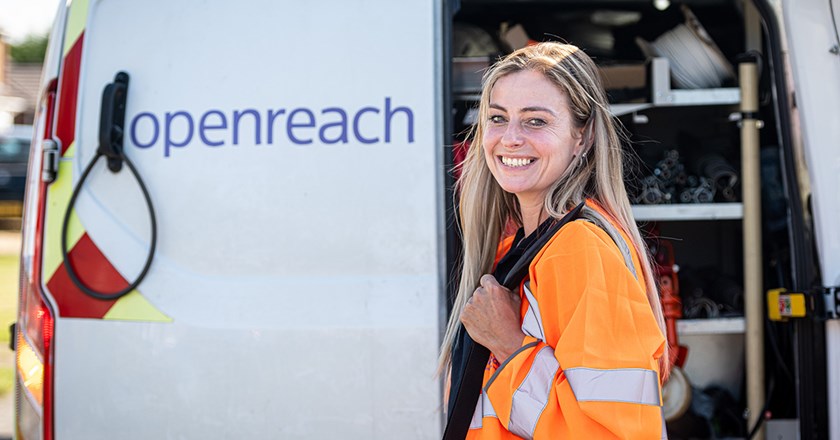 Openreach, the UK's digital network business and a leading national employer of engineers and EngineeringUK corporate member, has analysed the impact of hidden biases in language used in job adverts.

Research into language barriers that impact female job applicants has shown that it plays a fundamental role in the recruitment process, with women 50% less likely to consider roles that have a coded gender bias. But when presented with a gender-inclusive advert as part of the study, women’s interest in the role increased by more than 200%, with 60% stating this was because of the way it was written.

Working with linguists and gender bias experts at the University of Exeter, the project takes a detailed look at language used across Openreach’s recruitment channels. The team created a new, consciously unbiased, job description for the company’s entry level engineering role – with the language of the new advert carefully crafted to appeal to men and women equally, whilst actively combating some of the challenges females face in the pre-application phase.

The report uncovered 3 key areas for improvement including:

Whilst the shifts in the job specs were subtle, the results were overwhelming, painting a clear picture of the simple role that language can play in bringing more women into engineering, but with implications wide ranging across many industries.

In order to help understand and explore the impact of the language shift, the new wording was tested against the original advert with 2000 women of working age in the UK. The findings show that a third of women (31%) felt the original advert was more suited to a man than a woman, compared with just 13% of women for the new advert.

Despite four in five (80%) women admitting they wouldn’t consider working in engineering, more than half (56%) were interested in the engineering job role once it had been reimagined and the word ‘engineer’ had been removed. This was supported by the latent stereotyping identified for similar industries, with a quarter (24%) of women still feeling that certain roles are better suited to men.

Openreach HR Director Kevin Brady said: “We were amazed to see just how much of a difference language makes and have started the process of assessing and changing all relevant language to help overcome the challenges of diversity recruitment. We hope that this will be the catalyst for helping to break down barriers stopping women from considering a role in engineering.”

Hilary Levers, CEO of Engineering UK comments: “Engineering is a varied, stimulating and valuable career and it’s really important that we present it in ways that makes it accessible and attractive to as diverse and insightful a workforce as possible. The findings of Openreach’s research will help them do that. Their commitment to review, learn from and improve their own practices in this area is also highly commendable and something I’d encourage everyone working to inspire young people into engineering to do.”

Dr Chris Begeny, Research Fellow in Gender and Organisational Psychology at the University of Exeter said: “All too often the rhetoric around issues of underrepresentation and improving women’s experiences in male-dominated sectors emphasises the idea that women need to “lean in” and overcome their own “internal barriers” – overcoming that lack of confidence or lack of perceived fit for a position that might lead women to pass up on an opportunity to pursue a particular job. Yet these “fix yourself” strategies, often espoused as a method of empowerment, can perpetuate victim blaming. They reinforce the belief that the “problem” exists squarely within the individual – a problem of “internal barriers” – and so it is the individual’s responsibility to “fix” themselves.

“This of course misses the fact that women’s “internal barriers” often exist because of external barriers – exposure to subtly biased language, stereotypes, and discriminatory treatment that lead women and other marginalised group members to question their suitability for a job and thus their tendency to pursue that opportunity.”

He adds: “It is telling that the most common barrier to applying for a job, in general, was the belief that they didn’t have the right skillset. Women were far more likely to recognise that they had the relevant skills to pursue this job when it was described using gender-inclusive language – again illustrating how subtle shifts in language can drastically change perceptions of women’s fit and suitability for traditionally male-dominated roles.”

The company hopes its new linguistic approach will help it meet a commitment to recruit a minimum of 20% females into new roles this year – more than ten times historic levels.

With over half of women asked (55%) considering the possibility of a new career as a result of the pandemic there has never been a more important time to tear down barriers to recruitment and open-up previously closed sectors.

Read more about the research here