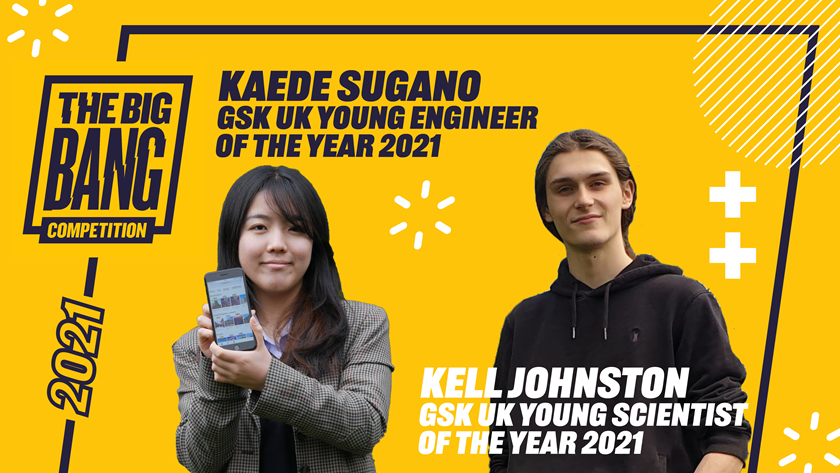 Kaede Sugano, a Year 12 student from Rugby School in Rugby was crowned GSK UK Young Engineer of the Year for her project, titled ‘RIHLA’. Kaede created her own algorithm which compares package holidays and suggests the best one to a traveller.
The project has resulted in a fully-fledged working website and was inspired by her grandparent’s desire to have a perfect package holiday for their 50th wedding anniversary.

Kell Johnston, a Year 12 student from Queen Elizabeth High School in Hexham, Northumberland was awarded GSK UK Scientist of the Year for his project, ‘Does Willow Extract Have Beneficial Impact When Rooting Cuttings? He wanted to see if willow water could be used as an effective method to grow plants as well as being an environmentally friendly alternative to synthetic products.

Serena Jacob, a Year 9 student from Bedford Girls School in Bedford, has been awarded the winner’s prize in the junior engineering category in the finals of The Competition. For her project called, ‘DM2.Prevent’, Serena created an app to prevent or potentially even reverse Type 2 Diabetes. The app targets reversible risk factors for the disease and provides ways to reduce those risks. Based on data inputted by the user, the app calculates personalised risk scores and generates a user-specific plan to reduce their risk.

Ludovica Knight, a Year 10 student from St Catherine’s College in Eastbourne, has been awarded the winner’s prize in the intermediate engineering category in the finals of The Competition. She made a model wind turbine that collect and stores energy and can eventually help villagers in Chad draw water from a well.

Bhuvan Belur, a Year 13 student from Westminster School in London, has been awarded the winner’s prize in the senior engineering category in the finals of The Competition. For his project called ‘Senseborg Belt’ he created a sensory device that people who have balance issues, such as vertigo and Parkinson’s can wear around their body, which helps prevent them from falling.

James Barber, a Year 8 student from St Faith’s School, Cambridge has been awarded the winner’s prize in the junior science category in the finals of The Competition. His project titled ‘An Investigation into The Anti-Microbial Properties Of Different Mouthwashes’ looked at growing microbes from a blue cheese vein and testing which of his family member’s mouthwash was the best at killing microbes.

Alex Lockyer, a Year 10 student from Brentwood School, Essex has been awarded the winner’s prize in the intermediate science category in the finals of The Competition. For his project titled ‘Can A Computer Software Programme Alleviate the Symptoms Of OCD?’ Alex created a 6 week brain training programme that helps people with OCD to overcome their fears.

Clara Norenberg, a Year 13 student from Oxford High School GDST, Oxford has been awarded the winner’s prize in the senior science category in the finals of The Competition. Her project titled ‘Producing a super-absorbent polymer based on chitosan’ project was an experiment to develop an affordable hydrogel, which could be added to soil to help plants, particularly in dry conditions to retain as much moisture as possible.

We’re lucky to have a number of organistions that sponsor individual prizes to help young people continue on their STEM journey. The sponsors and awards are listed below:

Congratulations to all the winners!

Previous winners of The Competition have gone on to enjoy a range of other achievements on the back of their successes – including, getting backing from businesses for their projects, setting up their own businesses, taking part in conference presentations to industry professionals as well as appearing on the television and radio shows to talk about their projects.

“There is no denying that students have had to deal with a lot of disruption to their learning in recent months, and the quality of this year’s entries is a testament to their talent, dedication and creativity under these difficult circumstances.

“At a time when we could all use a big dose of optimism for the future, the inventiveness and skill we’ve seen this year’s Big Bang Competition has been a reassuring and inspiring tonic for all those involved in the judging – so we’d like to extend a huge congratulations and heartfelt thank you to everyone who participated.”