Engineer from Aberystwyth on mission to save lives 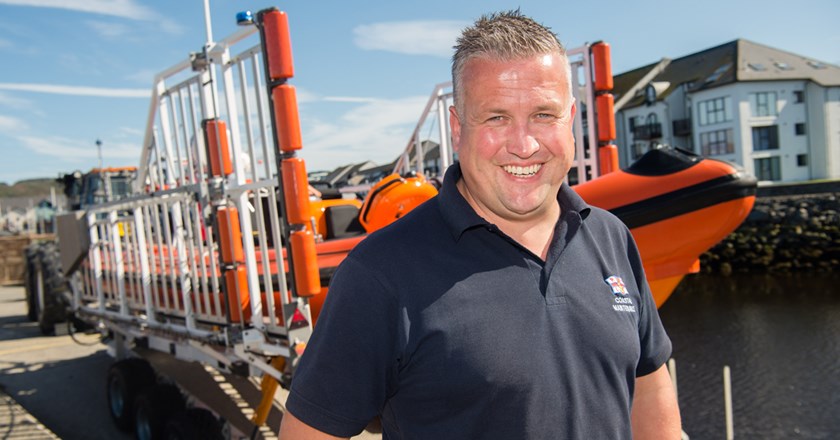 Rhodri Lewis from Aberystwyth has been chosen to feature in a national campaign showcasing how engineers are on a mission to make the world a better place.

The systems engineer for RNLI is one of just five engineers from across the UK handpicked by Tomorrow’s Engineers Week 2019 to front #EngineerOnAMission.

Rhodri, 39, was selected for his work helping to save lives at sea. As part of his role, Rhodri is responsible for developing, building and repairing the systems aboard lifeboats.

As an Engineer on a Mission, Rhodri became the star of a film that highlights the impact engineers have on the nation’s health and wellbeing. The film will be shown to 50,000 students at the Tomorrow’s Engineers Week Big Assembly on 6 November.

Explaining why he chose a career in engineering, Rhodri said:

“I was always destined to be an engineer, it’s my dream job.

“At school I enjoyed technology and sport. The teamship that I had in sport is part of my professional life now and I get to work on really interesting equipment.

“The sense of satisfaction I get from applying my knowledge to build, develop or repair something that mitigates the risks involved for the volunteers who go to sea, at times in dangerous situations, is second to none.”

“We want every young person to see that engineering offers a varied, stimulating and rewarding career.

“The UK needs tens of thousands more engineers and Tomorrow’s Engineers Week provides an opportunity for the engineering community to work together to inspire the next generation of engineers to meet this demand.

“We’re delighted to have the opportunity to share Rhodri’s mission, to save lives at sea, with thousands of potential future engineers.”

Further highlights of the Week include the first This is Engineering Day on Wednesday 6 November, challenging the public stereotype of the engineer and the second Tomorrow’s Engineers Week Big Assembly, which will see over 50,000 pupils taking part in the same assembly, at the same time.