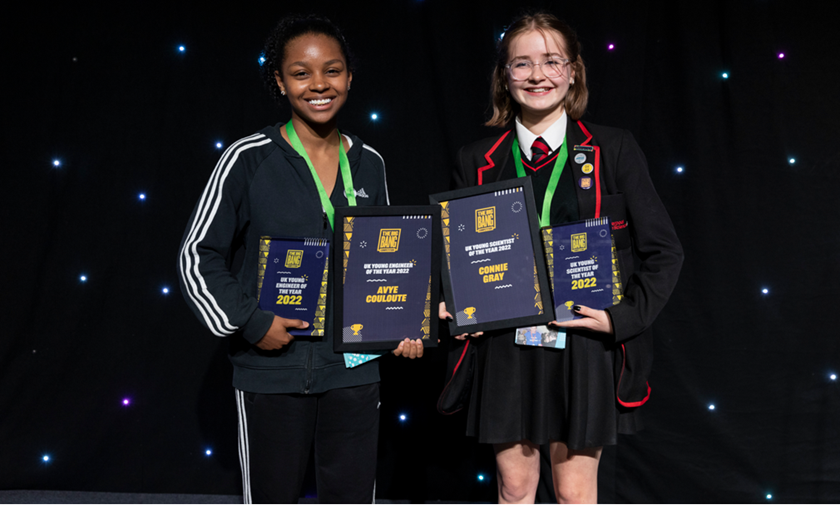 Winners of The Big Bang Competition were revealed at The Big Bang Fair on Wednesday 22 June. For the first time ever, the awards ceremony crowned 2 young girls as the UK Young Engineer and Scientist of the Year, which is particularly special seeing as it is International Women in Engineering Day (INWED) on Thursday 23 June.

Meet the UK Young Engineer and Scientist of the Year

Avye Couloute, a year 9 student from Surbiton High School, has been crowned as the UK Young Engineer of the Year. Avye impressed the judges with her invention which seeks to improve indoor air quality by monitoring and reacting to CO2 levels. The solution can benefit classrooms, collaborative working spaces, and seated eating areas in the hospitality sector.

Connie Gray, a year 9 student from Liverpool Life Sciences UTC, has won the title of UK Young Scientist of the Year thanks to her research comparing the structure of the features of birds from different climates and environments to each other. Her work aims to help with conservation efforts in areas of the world affected by climate change.

Both Avye and Connie will receive a £2000 prize for their achievement in The Big Bang Competition this year.

Lily-Mai Spinks, a year 12 student from Sir Isaac Newton Sixth Form Free School in Norwich, has won the senior engineering category in the finals of The Competition, for her project titled ‘ISOPOD’. Lily-Mai made a tent with a concertina design, aiming to provide a user and eco-friendly festival camping alternative.

Om Patel, a year 11 student from Queen Elizabeth’s School in North London, has won the intermediate engineering category for his project titled ‘Supporting People with Dorsal Flexor Weakness (Drop Foot) and Normal Calf Weakness’. This aims to support people with some walking difficulties with a designed a prototype brace that supports the leg from the knee to the foot and ensures that the person can walk more naturally.

Ryan Stubbs and William Bradshaw, a year 8 student team from St Faith’s School in Cambridge, have won the junior engineering category for their project titled ‘ElectroPi’. They created a seed-planting robot, which is designed to plant and water seeds based on soil moisture levels.

Lucy Coleman, a year 13 student at Sandbach High School and Sixth Form College in Merseyside, is a double award winner and has won the senior science category. Her project ‘Working Healthy’ aimed to redesign the way in which people work from home with a unique design of a weather-proof open-air office. She also won the Intellectual Property Office award for outstanding innovator.

Anastasia Herries, a year 11 student from St George’s School in Harpenden, has been awarded the winner’s prize in the intermediate science category. Her project titled ‘Essential Oils as Slug Repellents’ was designed to address the need for alternative and eco-friendly slug repellent.

Erin Carr, a year 8 student from Invicta Grammar School in Maidstone, has won the junior science category for her project titled ‘How the brain adapts to the loss of senses’. Erin’s aim was to investigate comparisons between using all senses and the loss of 1, with the hope of finding out how fast the brain adapts.

Aditya Mathur, Ali Kamel and Lucas Hoffman, students from Leicester Grammar School Trust in Leicestershire, have been awarded with The Siemens Digital Decarbonisation Award. Their project ‘AgriPod’ was designed to prevent water contamination for farmers in northern India. The creation followed Aditya’s visit to a relative’s farm in northern India, where he discovered that there was a vast array of potential issues that could be addressed with a technology and data-based solution.

Aisling Campbell, a student from St Mary’s College in Northern Ireland, has been awarded a place at the 62nd London International Youth Science Forum 2021. Her project was designed to investigate the efficiency of sunscreens in providing protection against High Energy Blue light (HEV) emitted by digital devices and UV, and creating her own sunscreen to protect against the damage of HEV.

Akhil Walia, Anoj Rameshprabahar and Kelvin Aye, students from Queen Elizabeth’s School in London, were awarded with The Army Humanitarian Award. Their project ‘Developing a solution to Hand-Arm Vibration Syndrome’(HAVS) aims to prevent the development of HAVS in the hands and arms of users by reducing the vibrations that are felt, specifically when using a reciprocating saw.

Alberta Fryer, Florence Burton, Phoebe Hill, Manaka Koreyasu and Sophie Farmer, students from Kingswood School in Bath, were awarded with The Stantec Developing Future Communities Award. Their project ‘Girls Into School: Leak Free For You and Me – Reusable Sanitary Pads’ was designed to create a reusable sanitary pad, which was born from the desire to help make period products more affordable and accessible to women and girls in Liberia and Kenya.

Jheel Patel and Bella Borysiewicz, students from Queen Elizabeth’s Girls School in North London, were awarded the Network Rail Innovation in Transport Award. Their project ‘Magnetic Hydrodynamic Drive for Marine Transportation’ was designed to use magnetic power to provide power to boats, ships and marine transport, in order to reduce emissions caused by fuel, such as pollution and spills.

Lucy Coleman, who won the senior science category, was also awarded with The Intellectual Property Office Award for outstanding innovator. Her project ‘Working Healthy’ aimed to redesign the way in which people work from home with a unique design of a weather-proof open-air office.

Sasha Polakov and Josephine Hibou, students from St Paul’s Girls’ School in London, were awarded with The Energy Institute Climate Change Award at The Big Bang Competition. Their project ‘SolUp’ involved designing window blinds that generate electrical energy via sunlight and could be used for green power generation with the home.

Congratulating all of the winners, Dr Hilary Leevers, Chief Executive of EngineeringUK, which organises The Big Bang Competition, said: “We received hundreds of incredible entries and the quality of the work undertaken impresses us each year. Young people have shown incredible resilience and determination during the past couple of years and the ambition, passion and enthusiasm the students show for their projects are truly inspiring.

“It certainly bodes well for the future that the scientists, engineers and inventors of tomorrow are already producing such astute and creative project work – congratulations to all those involved.”

Find out more about The Big Bang Competition on the Big Bang website.