Snack to the future 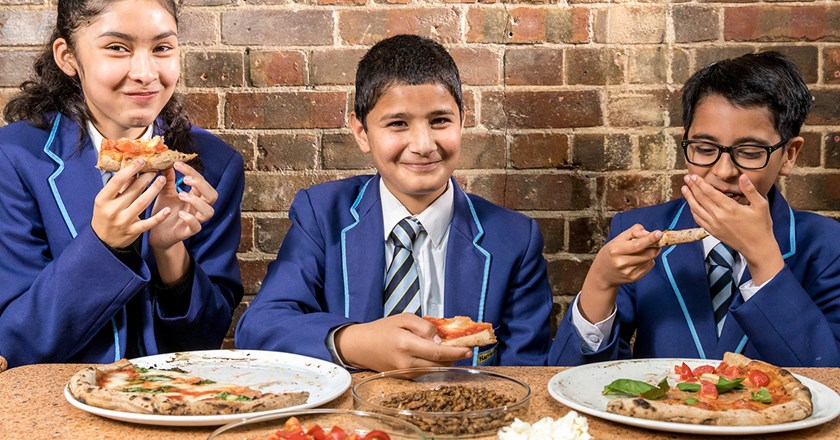 Pizzas of 2069 will be made using insect-based flour, mozzarella made from reverse-engineered milk and lab-grown meat

·      By 2069 your pizza could be made using commercially-available lab-grown meats and cheese, 3D printed by a robot chef and charred with lasers

·      To highlight how STEM skills are shaping the future of food, The Big Bang Fair has created the pizza we are likely to be eating in 20 years’ time

·      By 2039, pizzas made using plant-based cheeses, tomatoes grown without soil and flour made from insects will be the norm

·      The futuristic cheese and tomato pizza is free to try on 11th October at neighbourhood pizzeria, Made of Dough, in London’s Peckham

Find out more at The Big Bang Fair, the country’s largest celebration of science, technology, engineering and maths (STEM) for young people which takes place from 11-14 March next year at the NEC Birmingham. It’s free to attend and registration is open now

With a growing population, keeping the world fed and making sure that the Earth is being looked after is becoming increasingly difficult, meaning one thing: finding new ways of growing and producing food is essential. So it’s no surprise that scientists, engineers, entrepreneurs and farmers are banding together to find new ways to produce our favourite foods in more sustainable ways.

To highlight how our favourite meals and the way they’re grown and made may change in years to come - and literally give people a taste of the future - The Big Bang UK Young Scientists & Engineers Fair has challenged a futurist, and a London pizza restaurant, to produce the Pizza of the Future.

Fans of a cheesy slice will be relieved to see it looks like a regular cheese and tomato pizza – but the recipe may be rather less familiar: featuring super sustainable tomatoes grown all year round in LED-lit self-sufficient hydroponic farms using coconut husk “soil” and pollinated by the farm’s own bee population; cheese made using the protein of almonds; and a dough base containing ground-up insects. Crickets, to be exact.

In creating the Pizza of the Future  recipe, The Big Bang Fair asked applied futurist Tom Cheesewright to help identify some of the main ways our food will be produced in the future. .  “The Big Bang Pizza of the Future has been made using technology that is ready right now,” Tom explains, “but more big changes are on the way. We are just around the corner from commercially-available lab-grown meats and cheeses and giant vertical farms supplying city supermarkets with salad leaves. Your future pizza might be made from ingredients that have never seen the sun, or grazed in a field. And, it might be 3D printed by a robot chef and then carefully charred around the edges by a laser grill. This is truly just a taster of what the future holds.”

“For now, even replacing 20%-25% of the grain used for bread with a protein-packed alternative such as crickets could transform our reliance on the planet’s resources such as water, energy and land. And as we become more and more connected to other cultures around the world, we can expect to see lots of new flavours. In 20 years, we might see pizzas inspired by some of the fastest growing countries around the world. Maybe Yaji spice mix from Nigeria, or sweet and hot Indonesian Rujak. The people who object to pineapple on pizza will really hate that. Every step we take has huge potential for change. As this pizza proves, the food we eat in 20 years may well look very similar to how it does today but its journey to your plate will have been totally transformed by breakthroughs in STEM. The farmers and producers of the future are more likely to need qualifications that cover mechatronics, solar energy, energy efficient heating, genetic modification and nutrition to find alternative proteins, than animal husbandry.”

Beth Elgood, Director of Communications at EngineeringUK, added: “As The Big Bang Pizza of the Future shows, developments in science, engineering and technology are at the heart of feeding the world’s population now and in the future.  The next generation of scientists and engineers will be crucial to finding ways that balance the needs of a growing population with the availability of sustainable food sources and young people can find out more and learn where their STEM studies might take them at The Big Bang Fair next March.”.”

For those who don’t want to wait  years to sample the cutting edge of culinary creation, The Big Bang Future Pizza will be available to try for free at Made of Dough, in Peckham, London on Friday 11th October from 6pm*.

The Big Bang UK Young Scientists & Engineers Fair is the largest celebration of science, technology, engineering and maths (STEM) for young people in the UK. The event is taking place from 11 – 14 March 2020 at The NEC in Birmingham and registrations for free tickets open this week. For more information, please visit: www.thebigbangfair.co.uk.