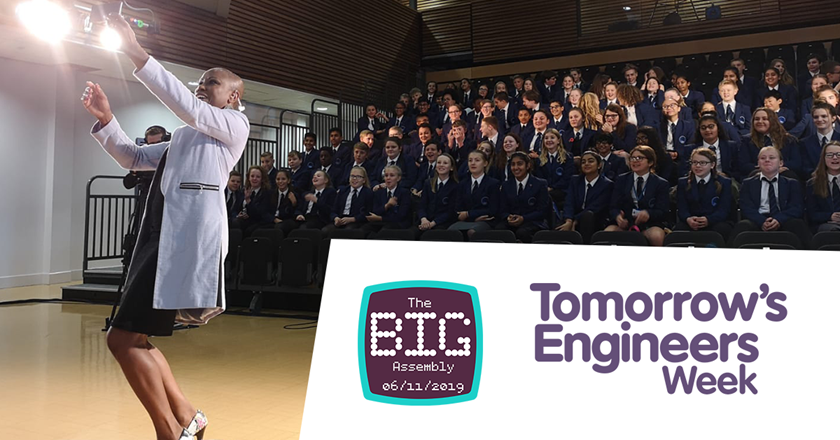 Initial plans for Tomorrow’s Engineers Week 2019 (4-8 November 2019, #TEWeek19) have been announced, focusing on the impact engineers make on the nation’s health and wellbeing.

The Week provides a unique opportunity for engineers, employers, universities and schools to showcase how engineers working in all sectors are on a mission to make the world a better place.

At the heart of the Week will be a “Big Assembly” where around 50,000 young people are expected to take part in the same school assembly at the same time. The Big Assembly will feature inspirational engineers on a mission to improve people’s health and the nation’s wellbeing by protecting the environment.

The Tomorrow’s Engineers Week Big Assembly will take place and streamed live on Wednesday 6th November at 10:30am – and will be available on demand 24 hours later.

Schools can sign up to take part now at http://www.bigassembly.org/register-tew/.

The Wednesday of Tomorrow’s Engineers Week will also see the Royal Academy of Engineering unveil the next major moment in its This is Engineering campaign, a day of partner activities to change perceptions of engineering among the wider public. Further details will be announced in due course.

More broadly, the Week will demonstrate how young people can be an engineer on a mission and turn the things they care about most into engineering careers.

Employers, professional bodies, universities, schools and individual engineers are invited to get involved to help inspire the next generation of engineers by registering for a toolkit of ideas which includes being part of our engineers on a mission campaign.

A toolkit of ways to get involved will be available from early September and employers, universities, schools, individuals and partners can get involved by visiting www.tomorrowsengineers.org.uk/teweek to register in advance.

Tomorrow’s Engineers Week is delivered by EngineeringUK a not-for-profit organisation, which works with the engineering community – employers and professional institutions - to inspire tomorrow’s engineers.

“Tomorrow’s Engineers Week has gone from strength to strength since it launched in 2013, growing as a result of the collective support and collaborative effort across the engineering community, including the professional institutions, engineering employers, universities, colleges and schools.

“We’re also delighted to be working with the Royal Academy in 2019 to showcase how engineers form a vital part of people’s everyday lives.”